Invasive, alien species are bad for ecosystems. They reduce bidoversity and disrupt food chains, including our own.

History is full of examples of intentional and unintentional introductions of invasive species. The introduction of cane toads to Northern Australia in the 1930s to fight cane beetles led to decline of many native predators. The fungus that causes chestnut blight snuck into North America via infected nursery stock; four billion trees died in 40 years.

What about creatures in the soil? Have they been affected by invasive species? Which species have gone extinct? Which ones are proliferating? It is important to think about soil as an invisible ecosystem, because many agricultural practices include the deliberate addition of microbes to the soil, biofertilizers.

Analysis of the world, from experts

The use of mycorrhizal fungi — fungi that grow on plant roots — as biofertilizers is becoming more common. Applying them as a kind of fertilizer makes sense because these fungi grow in plant roots and help plants get more nutrients from the soil.

Companies encourage farmers to use biofertilizers with the promise that biofertilizers will lead to healthier soil. The number of companies making mycorrhizal fungi has increased dramatically in the last decade — but there’s no easy way to know what they’re selling, where it’s being used and how much is being released into the environment. 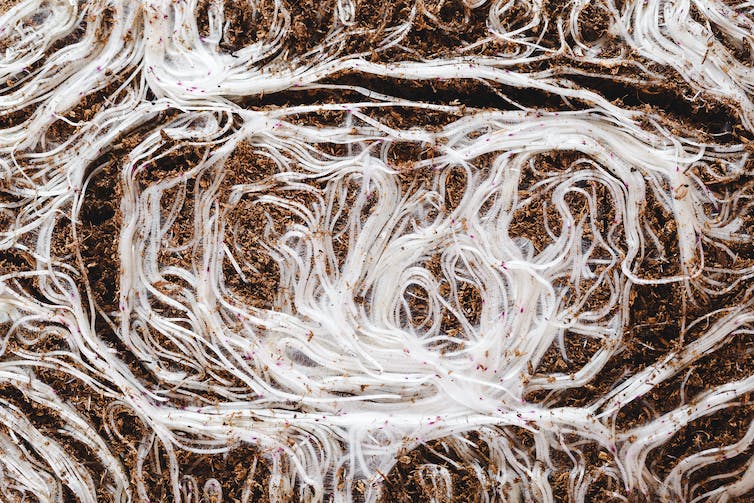 My lab looks at how mycorrhizal biofertilizers move in the environment and how they affect native ecosystems. Because mycorrhizas are an important part of all ecosystems, introducing an alien mycorrhizal fungus may have unintended consequences for native mycorrhizas and ecosystems in general.

The application of biofertilizers and mycorrhizal products involves introducing potentially invasive species. These products, which are alien to the environments they are placed in, must establish in a novel environment under a wide range of conditions. To do this, they need to compete against, and replace, native fungi. This is the definition of an invasive species.

The use of biofertilzers may not be a big problem if these products stay where we put them, like in the greenhouse or in a farmer’s field. But if there is one thing we’ve learned about microbes in the last 24 months, it is that they move, and they move fast. There is evidence that mycorrhizal fungi can move over long distances, through atmospheric currents or even as passengers on migratory birds.

In all ecosystems, mycorrhizal fungi link plants in a community through hyphae — thin strands of fungus that carry nutrients to plants. In this way, mycorrhizal fungi and their plant hosts become a superorganism — with plants belonging to different species linked via mycorrhizal hyphae (the filaments that make up the network of a fungi).

This allows plants to sense conditions elsewhere in the network by receiving warning chemicals through hyphae if there is a herbivore somewhere in the network and increasing defence chemicals before an attack occurs. Mycorrhizal fungi can also change the flow of sugars from the canopy when a seedling is shaded and needs more carbon.

The problem is, even though these networks are crucial for ecosystems, science does not understand how they are affected by biofertilizers. There is currently no research on how mycorrhizal networks are affected by the introduction of biofertilizers or what it means for ecosystems. Neither is there research beyond my lab of how far these products are moving. But science is clear on one thing: once we release these organisms into the environment, we lose the ability to control them.

This is the crux of the matter: we do not know how big of a threat biofertilizers pose to ecosystems. Yet, these products continue to be marketed and released globally, with little or no regulation. In Canada, they are considered soil additives under the Fertilizer Act, which is the federal legislation overseeing the safety of fertilizer and soil supplements. Regulation focuses on the toxicity of biofertilizers to humans and other animals, not their risk as invasive species.

A better framework might be the Plant Protection Act, which exists to protect plants, agriculture and forestry from the spread of plant pests. While mycorrhizal fungi are not pests, they are not universally beneficially in all contexts. For example, these fungi can act as a carbon drain for plants, suppressing their growth under certain conditions. It is not a stretch to say that, in some cases, they might act as plant pests.

If biofertilizers are not universally beneficial for all plants in all conditions, they pose a real threat to soil biodiversity and perhaps even plant diversity. If biofertilizers outcompete local fungi, this could change the composition and productivity of plant communities. This is a problem for natural systems, but also for agriculture and forestry.

We need to better regulate these products to ensure that they are not a threat to ecosystems. The thin skin of soil on our planet is home to the creatures who keep our ecosystems functioning — we must not forget about them in our quest to make agriculture more sustainable.

Visit AZOMITE® for more information about specific products for the uses you see mentioned throughout our website.